Picayune-- A stingy defense, a strong running game, and timely passing is the formula that the Maroon Tide

before a very sparse crowd.

Picayune started with a rumble and then a fumble.  On the first play from scrimmage, junior quarterback Ben

Hickman connected with wide receiver Justin Mark for a 45 pass play to put the Tide at the Goula 35.  However,

Picayune fumbled the ball away three plays later and the Panthers recovered at their 26.

Goula converted two first downs before being forced into a punting situation.  Hoping to catch the Maroon Tide

knapping, the Panthers attempted a fake punt and came up short and Picayune took over at the 50 yard line.

right end for the touchdown with 2:38 left in the quarter.  Dalton O'Meara's point after made it 7-0. 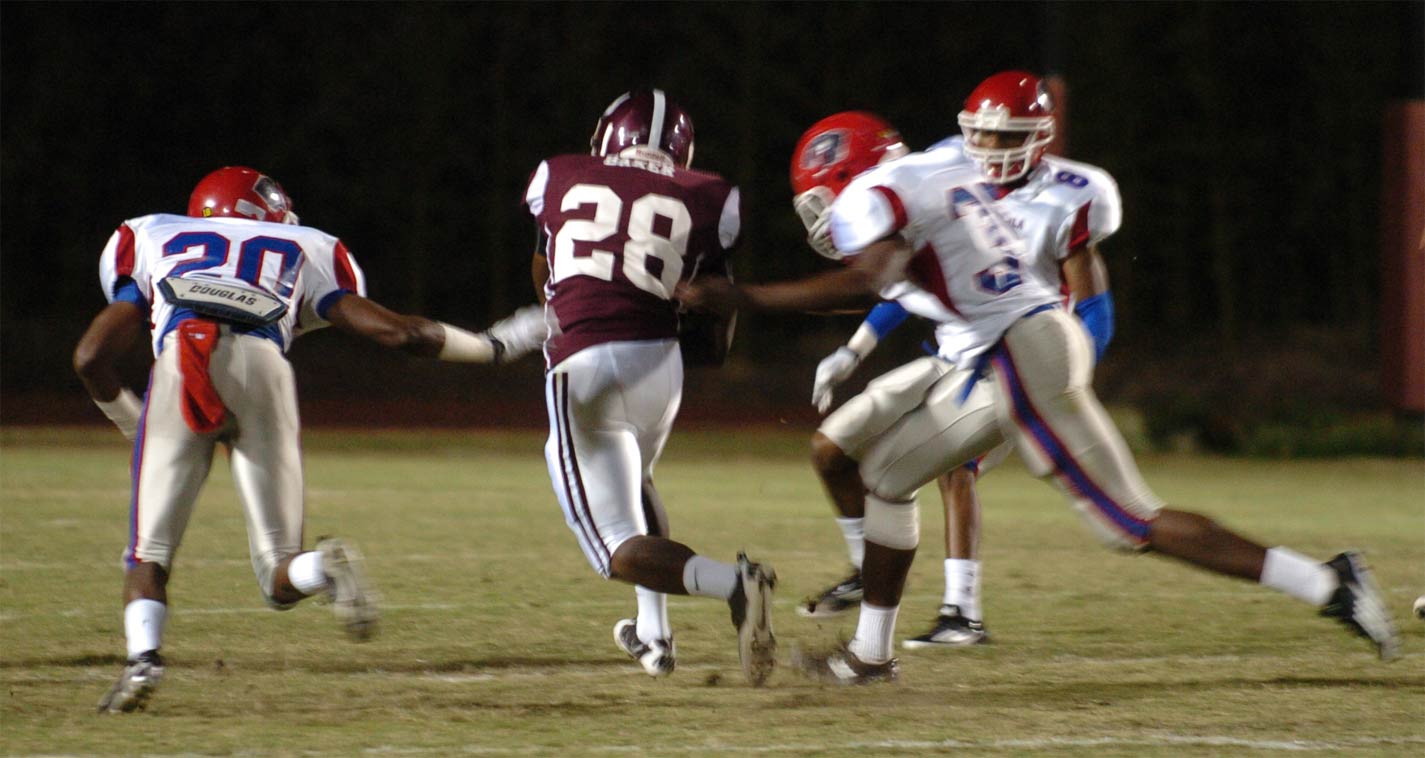 Neither team was able to move the football on their next possessions.  However, on the Tide's second punt

of the exchanges, the Panthers fumbled Picayune's punt and the Maroon Tide recovered at the midfield stripe

with 8:27 left in the second quarter.

On third down, Hickman found Daveon Greene over the middle at the Goula 35 and Green broke three

lead with 6:54 left in the half.  But the Tide wasn't content with the two touchdown lead.

On the ensuing kickoff, O'Meara executed a perfect onside kick that Greene recovered at the Goula 45.

Four plays later, sophomore Preston Dedeaux scooted in from 10 yards for the touchdown.   Magee had

a 30 yard run in the short drive that helped setup the touchdown.  O'Meara converted the point after for

Dereonte Magee (5) cuts inside of a bone-crushing block by Desmond Taylor (15).

The Panthers got their lone points on the next possession as they covered 65 yards in 9 plays.

Quarterback Will Tomes scored on a 26 yard keeper for the touchdown with :36 left on the clock and

offense looked like the Tide of old with two time-consuming, point-producing drives.

The first was a 12 play 95 yard drive that consumed 5 minutes and 17 seconds of clock.  The touchdown

came on a 1 yard run by Magee with 1:06 left in the third quarter.  O'Meara was true on the extra point to

The final points came on a 5 yard run by Dedeaux with 6:42 left that capped off an 11 play 65 yard drive

that took 3 minutes and 58 seconds.  O'Meara kicked his fifth point after.

solid game up front and once again linebackers Nick Marble, Troy Egana, and Cody Smith made their

Next week, Picayune (6-1, 3-0) will travel to Dantzler Stadium in Moss Point to take on the Tigers in

Dalton O'Meara (4) converts one of his five extra points with holder Michael Castenada (12).

Justin Mark (25) looks for yardage after hauling in a pass.